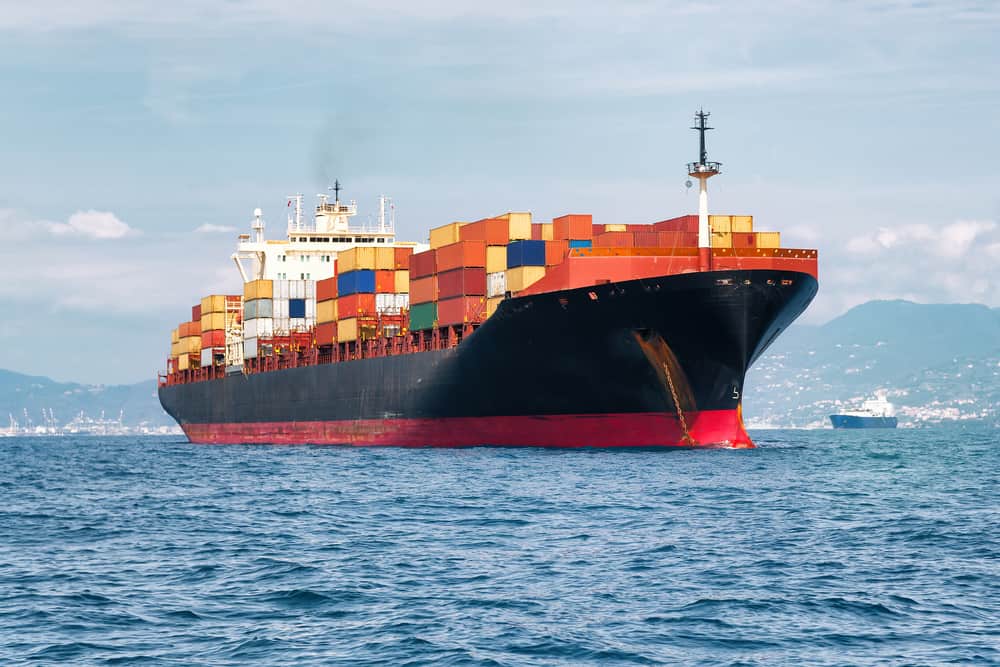 It goes without saying that U.S. tariffs singlehandedly affected transpacific trade since they were first implemented, with no end in sight any time soon.

Unless dramatic changes happen over the next few weeks, tariffs will continue to affect trade in the months to come. When removed, will there be a cargo rush and consequently, huge rate hikes? Not really. Many importers already looked elsewhere and shifted sourcing to alternate countries in Asia and other regions. Switching to a new sourcing country also poses a lot of risks, including that tariffs that can be implemented any time from that new country, product quality, political instability, poorer infrastructure, and changing service offerings. The trade war has shown that instability can occur any time, and having a single sourcing country has as much disadvantages as it has advantages. Southeast Asian countries benefited from the trade war through a volume increase that would not have happened this much otherwise. To meet increasing demand, the shift will further result in further infrastructure improvements in that area – good news for the shipping industry.

When tariffs were first announced, there was immense front-loading towards the end of 2018 in order to beat tariff hikes on U.S. imports from China. This led to higher volumes and higher freight rates during a time when it is considered a traditionally slow season for ocean shipping as most importers are busy with end-of-year inventory. Throughout most of the year, volumes between China and the U.S. have been consistently lower than over the previous year. U.S. containerized imports from China were down 7.9% in the first ten months of the year. Overall imports from Asia are declining by 11 percent year-over-year. The below chart also shows the dramatic volume shift very clearly.

Regardless of Vietnam’s volume increase, there is a 1.3% drop in year-over-year TEU numbers from the top 10 largest Asian import countries. 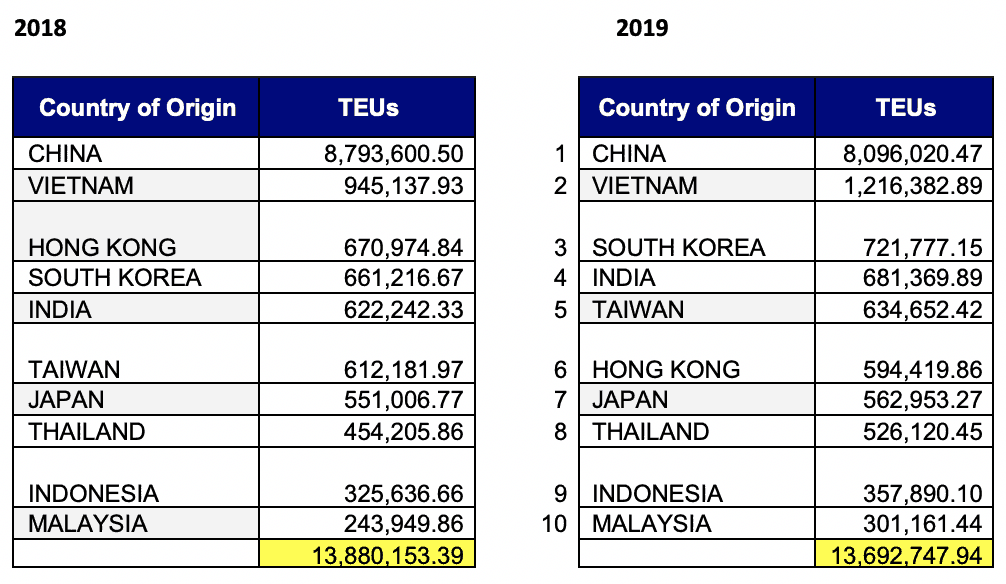 Looking at the volumes, the biggest winner of the trade war was Vietnam, with a 28.6% volume increase in the first ten months of 2019 compared to 2018. However, please note that not all of the increase occurred due to pure production in Vietnam, but due to other factors, such as attempts to change the country of origin in order to beat tariffs for which Vietnam customs and government implemented very strict rules.

Back in the U.S., the biggest loser of the tariff war were West Coast ports, which are the gateway for Asian imports. There was a 1.5% decrease in the volumes that West Coast ports handled.

We are going into 2020 with a lot of unknowns and with many different factors that may affect the shopping industry in different ways. Below are our general expectations for the year 2020 in shipping.

1. There likely will be an overall increase in shipping costs.

Last year around this time, ocean freight rates from China were around $1,000 higher than current levels. With the exception of a few weeks, spot freight rates have been lower than fix rates since the new contract season started back in April-May. With the introduction of the low-sulphur regulation (IMO 2020), there is an increased cost. Since current overall rate levels are low, the impact of the IMO regulation is not going to be felt immediately, as the costs are rolled into the bunker adjustment factor with different carriers following different guidelines. This new regulation will add as much as $60 billion annually to fuel costs.

The added cost from the IMO regulation will mean that in the first sign of a strong market, overall freight costs will increase quicker and will most likely hold. However, we don’t anticipate a strong rate market in 2020. There will be an increased focus on profit from the carrier’s end and they will do their best to keep rate levels higher through different means.

2. The shipping industry will become more sustainable and environmentally-friendly.

Along with the IMO’s low-sulphur fuel regulation, the organization is also implementing new rules forcing shipowners to install new equipment by 2024 to clean the dirty ballast water their ships suck in and discharge. This costs around $50 billion. In 2018, the IMO decided to reduce the shipping industry’s carbon emissions in half by 2050. All ships in service collectively produce 2% of the world’s carbon emissions, 13% of sulphur emissions, and 15% of nitrogen oxides. The new sulphur limits will reduce childhood asthma and premature deaths as a result of the high-sulphur percentages currently used in ships.

3. Technology will not disrupt shipping, but it will make it more efficient.

It is understood that technology will not disrupt the shipping industry as it did to other industries as once assumed, at least in the short term. However, it will help to continue to improve processes – especially the customer experience in total visibility and other areas. There are many startups which first targeted traditional businesses by trying to directly disrupt their business models and structures. But in the end, most of them switched their positions and supplied proprietary solutions to the shipping industry. This is helping small-to-midsize companies compete directly with the largest incumbents and bring further value to a larger client base.

4. Through the concept of “industries of scale”, the shipping industry will continue to become more balanced.

After years of consolidation, carriers have finally started to control supply with a much better discipline. Through capacity cuts and other means, carriers will continue to influence the market. This would help up to certain point as the underlying major issue, a supply and demand imbalance – although it’s gotten much better, it still persists. We still believe smaller carriers remain the most vulnerable. They are already making efforts to join service alliances, but eventually another merger might be on the horizon. A reduced number of steamship lines will mean reduced service loops and less options to catch certain deadlines at origin countries. Carrier discipline will further increase with the implementation of winter programs.

5. The geographic shift of shipments will continue and accelerate.

The shift of shipments which has been underway since the second half of 2018 will further accelerate in 2020. Most importers already completed their set ups from alternate countries and the real effects of the volume shift will be seen in 2020. This will mean more service offerings from countries in Southeast Asia, better infrastructure investments, and diminishing shipping volumes from China. Clearly, in the foreseeable future, there is no other country that will overtake China as the world’s factory, but the trend is already there and eventually not one but few countries will push forward their volumes.

In anticipation of higher volumes, no major capacity cuts have been announced yet by any carrier for January 2020 prior to the Chinese New Year which falls into the 3rd week of January this year. Although most warehouses are still full as a result of front-loading from China over the past months, there will be increased demand until the Chinese New Year holiday. There will be a sharp drop in February, and once factories will begin to come back around mid-February, production will begin and the real picture for 2020 will start to be seen from mid-March onward. Carriers will push for higher rates during this time as multiple GRI announcements are expected in the hopes of going into the contract season with higher rates.

How the rate market will play out remains to be seen, but 2020 will not be the greatest year for transpacific inbound trade as the underlying major issues are still there, and an expected slowdown in the U.S. will not help this overall situation.

Serkan Kavashttps://www.mts-logistics.com
Serkan Kavas was born and raised in Turkey. He graduated from Dokuz Eylul University with a Degree in Business Administration in 2001. He had an internship in Germany at a major industrial company after college. He worked at their family business in Turkey and managed their exports from Turkey to Europe. He moved to the U.S. to continue his education in New York and obtained his MBA degree with International Business concentration at New York Institute of Technology in 2005. After graduation he was recruited by MTS Logistics and he has been working at the company since 2005. Serkan worked his way up from the entry level to operations manager and to his current position as our VP of Imports at MTS Logistics. He wears different hats daily with different responsibilities. He has vast knowledge, experience, and understanding of all aspects of logistics, freight, and the supply chain. His focus now is to help develop our import department and help our company move forward.
RELATED ARTICLES
Featured