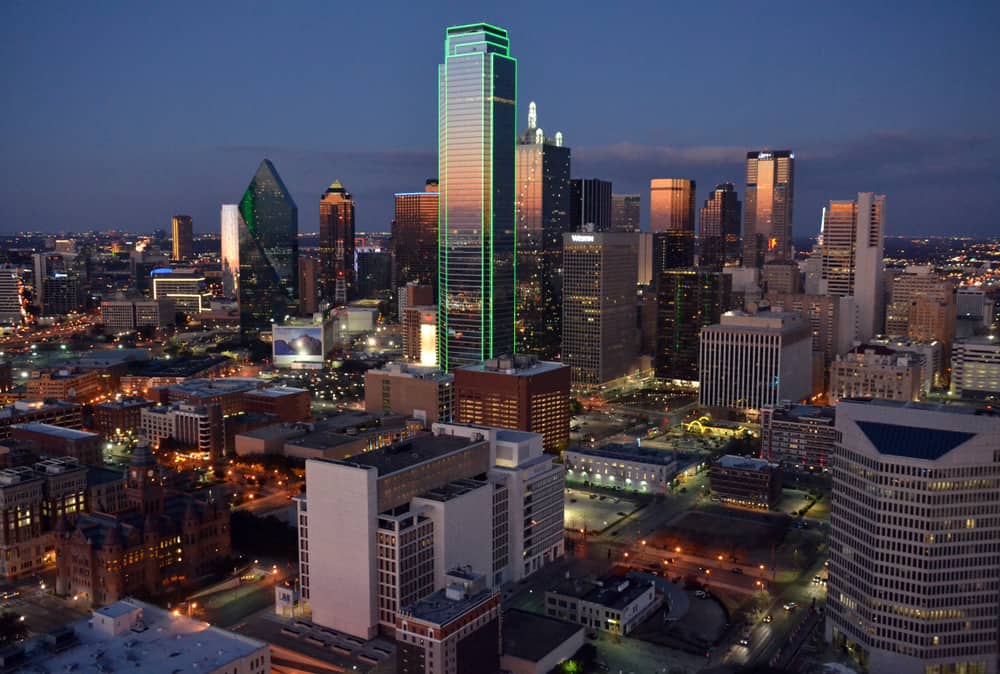 Texas is the second richest, and most populous, state in the United States, preceded only by California, with its 39 million inhabitants and a GDP of over $2.5 trillion.

Just to give an idea of the size and proportion of Texas’ economy:

Texas stretches for 808 miles on the north-south axis, and 870 miles on the east-west axis. For this reason, it experiences the influences of different regions and geographical areas:

The charm of Texas lies in the fact that it is so big that it can “contain” a bit of everything: urban settings in which to admire huge skyscrapers, endless natural spaces completely devoid of infrastructure, the headquarters of NASA, and the famous live music evenings of Austin.

Texas is particularly active in the field of foreign trade. In fact, Texas is the first state for export value among all states with almost $300 billion per year. The main reference markets are Mexico, Canada, Brazil, and China.

To understand the economic strength of what is known as “The Lone Star State,” we must consider that Texas ranks in the top 15 major world economies, especially thanks to the excellence it offers in various sectors.

Texas is the state that produces the most energy in the United States, and the largest producer of oil and gas, equal to about 20% and 30% respectively, of the total production of the U.S. It also produces the most renewable energy, being the largest producer of wind energy within the U.S. and exhibits excellent performance in the fields of solar, hydroelectric, and biofuel energy.

Naturally, Texas’ vast territory favors the agricultural industry and agribusiness. All cotton, corn, wheat, peanuts, fruit, grapes, potatoes, rice, combined with the breeding of cattle, is worth more than 20% of the wealth produced each year in the state.

It must be said that specific economic activities correspond to each region or area of ​​the state.The timber industry is concentrated in the east, the Oil & Gas, biomedical research, and aerospace industries thrive in the Houston area, while Dallas is the center of IT, and the Austin area is home to the “Silicon Hills” famous for hi-tech production (hardware, software and semiconductors.)

Texas is a Business-Friendly State

Among the advantages offered by Texas, there are certainly fiscal ones that increase its appeal for all potential investors: particularly that Texas is business-friendly.

Texas’ tax policy does not provide any additional state income tax, on both the corporate and personal sides, so only federal income tax is paid. Therefore, the tax burden is about one-third lower than the national average.

However, there are other factors that drive economic growth, and support a high level of quality of life for the state’s residents, including low housing costs, an agile bureaucracy, and a wide availability of jobs, which combined allowed Texas to be barely affected by the global economic crisis.

A Focus on the Dallas-Fort Worth Import Market

Focusing specifically on Dallas-Fort Worth area, my sales territory for the past several years, I can definitely state that these growth trends have been exactly mirrored there.

The thermometer of an economy can be also taken by evaluating how much freight the state is bringing in. From an imports perspective, it’s interesting to see how the Dallas market has grown in 2017 versus 2016. The market grew “smartly” with 3.3% growth. A similar market case is Southeast Asia, where labor costs in China have increased and other countries are investing in technology and manufacturing, so importers have diverted their attention to other countries’ suppliers. Some of these more convenient and competitive markets including India, with 18% growth, Japan with 43% growth, Vietnam with 20% growth, and Malaysia with 26% growth. All of these contributed to overall import growth.

Source: Datamyne – Not including China and Hong Kong

Another interesting analysis is related to what type of commodities are being imported.

Driving around the neighborhoods surrounding Texas’ twin cities, one sees the evidence of continuous and never-ending expansion, building, and frenetic activity. It is easy to feel like being part of a huge, massive universe that keeps devouring land.

It is so easy to get lost in the multiple highway levels across the numerous intersections which connect all the extremities of the cities/towns that are part of Dallas.

If we analyze the data provided by Datamyne, the world’s largest database of import/export data and international trade statistics, the first and evident result is reported as per below.

I have grouped all the similar commodities imported in 2016 and 2017, and after having categorized them, the result that shows is not surprising at all:

I expect that 2018 will be a very solid year, as trends pace along with what was established in 2017.

At MTS Logistics, we will be there, glad to participate and contribute with our efforts, knowledge and courtesy, to the growth of Texas.

Logistics is a big component of this success, and we want to make sure we are on top of this game for you and your company.