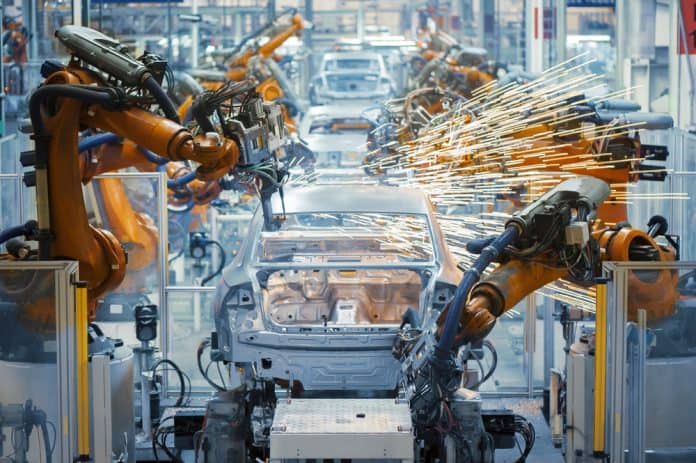 For more than a week, some Canadian truckers have protested vaccine requirements in Canada’s capital, Ottawa, by blockading key routes in the city and refusing to leave. Now, the protests are blocking key U.S.-Canada border crossings in several locations – a development that is affecting U.S. auto maker operations.

The Canadian trucker blockade has made its way to U.S.-Canada border crossings in Michigan, Montana, and North Dakota, three border states. One of those states, Michigan, is home to the main U.S. plants of several U.S. auto companies, with Ford Motor Company and General Motors being the two biggest.

Ford and General Motors are both located in Michigan’s capital, Detroit. Right across the Detroit River is Windsor, Canada, and truckers protesting have taken full advantage and have blocked the Ambassador Bridge, a key route between both countries. Now, both auto makers have had to scale back operations and operate with contingencies in mind.

Ford Motor Company has scaled back operations at its Windsor, Ontario plant.

Right across the Detroit River, operations have slowed down at Ford’s Windsor plant as the Ambassador Bridge was affected by the trucker protests. As a result, Ford says its working at “reduced capacity” at that plant, which makes several Ford SUV models. Perhaps the biggest impact is on Ford’s flagship F-150, one of the most popular pickup trucks in the U.S. today. Ford’s Windsor plant makes engines for the F-150, another key supply chain that is in danger of further disruption as a result of the blockade.

General Motors has resorted to unorthodox measures to keep its supply chain humming along.

General Motors builds some of its biggest-selling vehicles in the U.S., but receives certain components like lights and bumpers from Canadian operations. On Thursday this week, Ford’s rival General Motors announced that it had started to employed unconventional method to ensure that those components would be able to enter the U.S. and minimize disruptions in its supply chain. Since some components had to be delivered to GM’s plant in Fort Wayne, Indiana, GM considered the unusual step of flying the parts in via charter flights from Windsor, Ontario. The auto maker had little other choice as the parts allow the company’s assembly line “just in time” manufacturing to work. Without on-time delivery of all parts, GM would waste its time building the rest of the vehicle.

The trucker protests also had an impact as far south as Kentucky, the home of one of auto maker Toyota’s key plants.

Toyota receives some parts for its fast-selling vehicles from Canada and typically has them delivered by truck to its plant in Kentucky. However, with the Ambassador Bridge being largely choked off, Toyota confirmed it was experiencing production delays. There was no word on whether the company also resorted to unorthodox measures such as charter flights.

Relief for auto makers – and other – supply chains may be on the horizon.

Yesterday and today, U.S. President Biden initiated very high-level talks with Canadian government officials, pushing them to take action to break up the protests and fully restore Canadian infrastructure. Then, today, the Detroit Free Press reported that one lane of the Ambassador Bridge was close to reopening. The situation is fluid and hopefully things will open up much more broadly over the weekend and in the coming days.