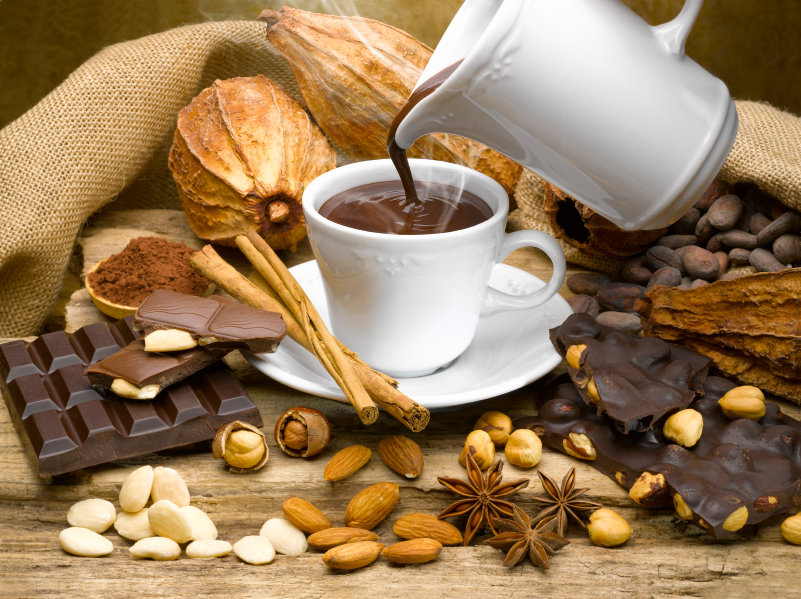 Winter is right around the corner, some say it hasn’t arrived yet, but after the polar vortex stationed over the North East this week, it’s safe to say that the cold is here to stay for the next couple of months.  For a person who grew up under the blazing Caribbean sun 365 days a year, winter is very unnatural. But after numerous years living abroad, I have come to enjoy this time because it has allowed me to experience things that I had never felt before.  In comes HOT CHOCOLATE or HOT COCOA, however you want to call it; it’s so good.  I’ve had it many times in Puerto Rico, but only in cold winters did it become relevant.  I don’t drink it as much as I would like to, but there are some days that I love reaching in to the pantry and getting the ingredients to prepare a batch of this delicious elixir.

Drinking chocolate has a historical significance; one that most people don’t know or even care to think about. It was only because of the European conquest of Central and South America that the planet became familiarized with this product. History claims that a cacao beverage was served to the Emperor Montezuma and the noble people of his court, at the peak of Aztec civilization. During the 16th century, cacao was served only as drink, there was no such thing as a chocolate bars, chocolate truffles or chocolate chip cookies. These Mesoamerican natives believed that cacao had special powers, they used vanilla, chili and other spices to enhance its natural bitter flavor and in some areas it was even used as currency for trade. It only took less than 100 years, for this favorite beverage of the Americas to be a staple at European courts. It is during this time that sweeteners like sugar and honey are added to the cacao concoctions, beginning a revolution that would change history forever. Conquest led to trade and trade helped cacao become of one of the most lucrative industries in the world today.

In 2014, the Cacao bean is grown in many different countries with the right climate conditions for its growth. In fact, it has become central to some West African nations’ economies like Ivory Coast & Ghana  were more than 70 % of world production of cacao is produced. The bean is not endemic to these countries; it was introduced as a new crop during the 19th century and is now revered as one of the best kinds ever grown. Today chocolate is sold everywhere, it can be from an over the counter product like a Snickers Bar to a high end truffle created by a chocolatier in a boutique in Bruges, Belgium.

The world is entranced by this product, there’s even a term for the most extreme: CHOCOHOLICS; but some experts are foreseeing that the glory days of chocolate may come to an end sooner than we would expect. According to an article by Mark Schatzker of bloomberg.com in reference to chocolate, “Last year, we again consumed more cocoa than we were able to produce. This year, despite an unexpected bumper crop, supply barely kept pace with the recent upswing in demand. From 1993 to 2007, the price of cocoa averaged $1,465 a ton; during the subsequent six years, the average was $2,736 — an 87 percent increase” Further studies claim that by 2020 the demand for cacao is expected to exceed production by 1 million tons, and 2 million tons by 2030.  2020 IS IN 5 YEARS!!!   On the other hand, the International Cocoa Organization refuted that claim saying that their predictions and forecast do not show these mammoth numbers.  They will accept that shortages are attributed to agro diseases like Witches’ Broom or Frosty Pod; which have whipped out complete crops in Brazil and Costa Rica, droughts and climate change, a growing demand in Asian markets as well as the change by some cacao growers to more lucrative crops like rubber or corn.

Whatever the truths, I cannot see a world without chocolate in it. In my opinion I don’t think that in 5 years the word chocolate supply will be in danger, maybe I just don’t chose to believe it. Chocolate has become a prized possession for many: to me it warmed me up on cold nights while in school at Amherst, MA,  it is still a great gift for birthday, its synonymous with Valentine’s Day and Love, for others it’s merely a business venture and to a few it’s a way to connect to their ancestors.  Whatever your case may be, next time you have a taste of chocolate, think what it would be like if it didn’t exist anymore, the CHOCOPOLYPSE maybe closer than we ever want it to be.