Enter the Dragon: The Nicaragua Canal 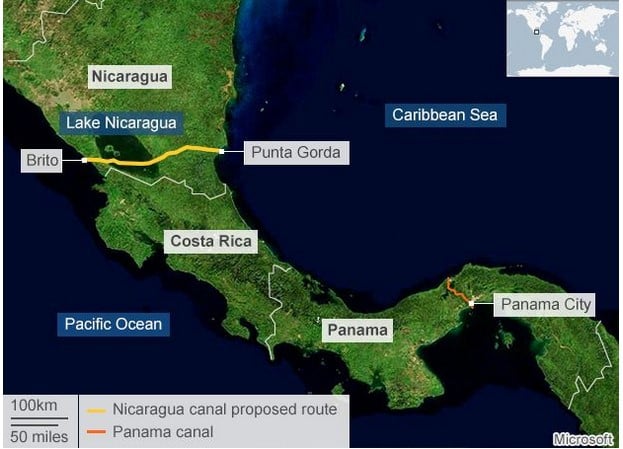 Connectivity has been one of the greatest motivator in human existence. Wanting to be interconnected; finding the easiest way from point A to point B, has inspired great thinkers, explorers and scientist to test the limits of human possibilities. It is because of this that world trade was able to flourish when a few brave individuals set sail and discovered that the ocean would be the highway for wealth, growth and conquest.  For hundreds of years pioneers set to solve what today is still a valid issue: what is the fastest way to connect east and west?  Almost 500 years ago, that simple idea was the catalyst for a colonial revolution, discoveries, mass accumulation of wealth amongst certain countries and the start of the industrial era that has shaped the world we know today.

In 2015, some say that the future of connectivity in ocean shipping lie in the hands of a private Chinese development firm by the name of HKND GROUP led by Mr. Wang Jing. Mr. Jing’s net worth is a little bit over 8 billion dollars; he made his fortune in the telecommunication industries.  In 2014 he began using his power and influences to start realize a 50 billion dollar project in Nicaragua; building a canal that will facilitate transportation of goods from east to west and vice versa on the biggest carrier vessels in the industry. The Journal of Commerce reported this month:

“Since the debut of mega container ships two years ago on the world’s oceans, the trend is sharply upward. Each of the behemoths can carry more than 18,000 20-foot shipping containers. So far this year, eight maritime lines have placed orders for 39 of the mega-ships, Read more here: http://www.mcclatchydc.com/static/features/NicaCanal/?brand=oly#storylink=cpy

HKND is betting on the fact that this trend in vessel will only continue to increase and were it will benefit and justify them in realizing the almost impossible task at hand. Below you can see a breakdown of vessel trends and how the Nicaragua canal will distance its self from the completion.

In Nicaragua plans for this project has existed for many years, but it’s been too costly and risky to create. History has taught world leaders, with the Panama Canal, that it has not been an easy task to maintain and evolve a project of this magnitude. Yet, even though the canal was under USA political and military control for a century, in two decades after it was handed over to Panama, the country has become a leader in the region and in the shipping world. The Chinese Firm believes that if market indicators like vessel capacities and demand of consumer products continue its rise to importance amongst other indicators, Nicaragua has the same potential as Panama and it may soon set up Nicaragua as a major player in the region.

The Nicaragua project is years away from completion, preliminary constructions stages began early 2015 but it faces, in the local and international community, mixed feelings due to the fact that its lacks major ecological impact studies, it will displace Nicaraguans from their farmlands and that it is not quite clear what is the political involvement of the Chinese Government with the private company and the country they want to change. In their defense, on the other hand, as China becomes more involved in global economic issues and its interest in Latin America is on the rise, the HKND Group believes that the canal will not only transform the world trade routes, but it will place Nicaragua in the fore front, bringing infrastructure, technology, job security and revenue to one of the poorest countries in Central America.

A big part of this project is focused on being different from what happened in Panama, were the US took control of the passage for a century, making Panamanians strangers in the own country.  The HKND Group say that the Nicaragua Canal will not be project were land is claimed by a foreign super power, but a fruitful partnership between two countries that will benefit the region and the whole world. For sure a lot of things have to happen before this canal is all set and done. Huge amounts of money, supply & demand curves and economies of scale must stay positive so that the industry pushes for more vessel capacity and productions of goods to justify the building of the canal. Oppose it or not, one thing is clear, humans will do whatever they can to find an edge in trade and conquest. 500 years ago, sailors jumped on vessel and headed toward the edge of the world in look for a shorter path to riches, fortune and fame, today men and women will move rivers and mountains and try to improve connectivity once more