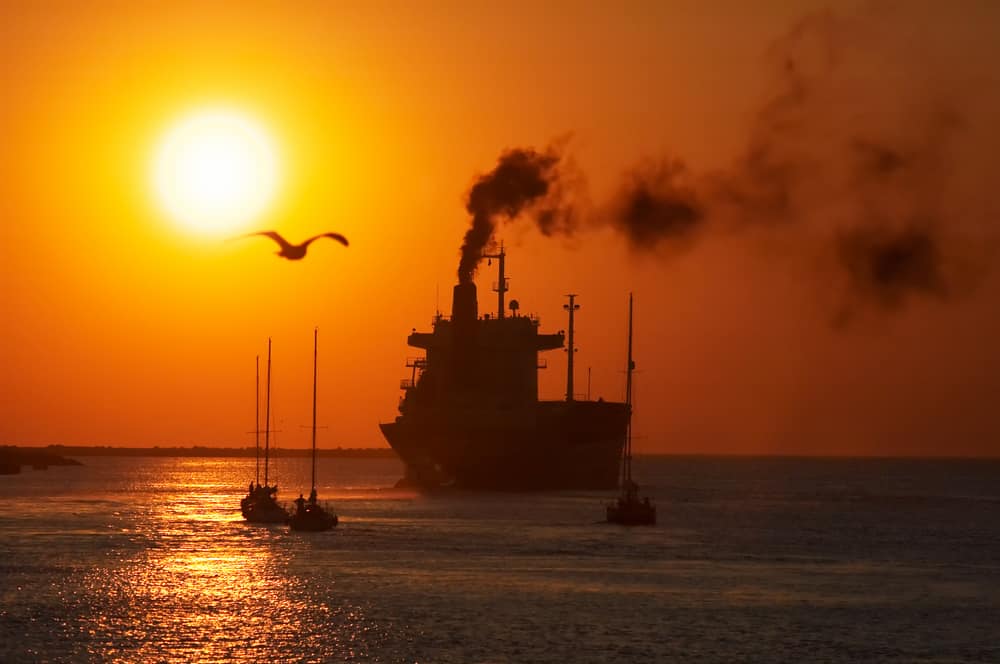 How much does it really cost to keep these vessels going?

Fuel costs represent as much as 50-60% of total ship operating costs, depending on the type of ship and service. Ocean carriers are required to recover these costs to maintain levels of service, meaning the price of shipping goods will continue to face upward pressures.

To illustrate the effect of rising fuel costs, consider the following example of a large modern container vessel used in Trans-Pacific trade, with an actual, maximum container capacity of 7,750 TEUs (twenty foot equivalents) or 3,875 FEUs (forty foot equivalents.) With the cost of bunker fuel at $552 per ton, and with fuel consumption of 217 tons per day, a single 28-day round trip voyage for this one vessel would produce a fuel bill of $3,353,952. This number could be greater for a number of reasons, such as if the voyage were more than 14 days long, or if the vessel were smaller and less fuel-efficient per container, or if scheduling delays required the vessel to speed up to stay on-schedule.

How much would it cost to keep 5 vessels going for an entire year, assuming the same costs?

Recovery of fuel costs from cargo customers is a challenge when one considers that vessel capacity utilization is not 100%, that trades are not evenly balanced, that different trades and commodities can handle different levels of rates, and that fuel prices continue to rise. If a cargo shipper pays less than its share of fuel costs, it can only mean that other shippers must pay more, and/or the carrier fails to recover its operating costs. This is not a sustainable business scenario.

The global shipping industry is bracing for a key regulatory decision that could mark a milestone in reducing maritime pollution, but could nearly double fuel costs in a sector already reeling from its worst downturn in decades.

To combat such pollution, the International Maritime Organization’s (IMO) Marine Environment Protection Committee will meet in London from Oct. 24th to 28th to decide whether to impose a global cap on SOx emissions from 2020 or 2025 onward, which would see sulfur emissions fall from the current maximum of 3.5% of fuel content to just 0.5%.

The European Union has already agreed that the 0.5% sulfur requirement will go into effect in 2020 within 200 nautical miles (370 km) of EU Member States’ coasts, regardless of what the IMO decides.

Authorities in Shenzhen, the world’s third biggest container port, introduced tighter controls this month, demanding that ships calling there do not use fuel with a sulfur content of more than 0.5%.

Ship owners can comply with these tighter controls by either:

The first choice, switching fuels, will also increase the cost of fuel.

Fuel oil analysts calculate the difference in price between HFO and LSFO of around $200 per tonne. The additional cost for a 20,000 TEU ship would be $50,000 a day.

In contrast, the scrubbing technology cost of installing a scrubber system for this size of ship would be around $8m, and based on calculations, this outlay could be recouped in just over six months.

CMA CGM decided their newly-built 23,500 TEU “megamax” ships will be powered by LNG.

Operational changes have been implemented by carriers to address rising fuel costs.

Carriers are trying to act to address the excessive costs of fuel by utilizing a range of operational adjustments.

Beginning in early 2007, most container lines began restructuring their operations to address fuel price trends. They have:

The above changes show the carrier’s actions on reducing fuel consumption, and consequently, their fuel costs.

Every sector of the economy is being affected by rising fuel costs. The transportation industry is being particularly hard-hit.

Rising fuel costs, environmental measures and operational changes cost will have a significant impact on carrier’s profitability for the foreseeable future.

Elizabeth Stratiotishttp://www.mts-logistics.com
Elizabeth is a Marine Engineer and Naval Architect graduated from the Technological Institute of Athens, Greece. She has experienced the shipping industry by working for two ship management companies in Greece. In both cases, she was hired by the Purchasing Department. For the last year, she has been living in New York. She started her career in New York by working as a sales engineer, and Naval Architect, in a small suppliers company. Currently, she works as a Export Documentation coordinator for MTS Logistics.
RELATED ARTICLES
21st Century Challenges