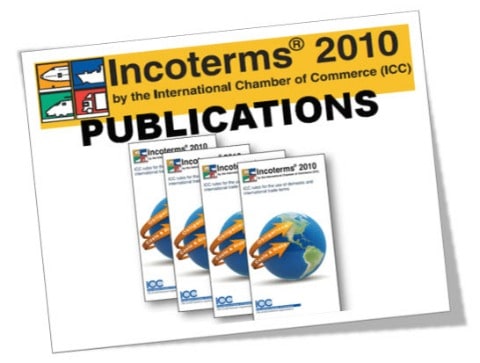 Incoterms are series of three-letter trade terms related to common sales practices. The goal of Incoterms rules is to help clearly communicate the costs, tasks and risks associated with the transportation and delivery of goods worldwide.

Even though the idea of creating a set of rules was first brought by International Chamber of Commerce during 1921, the first Incoterms rules was published in 1936. The first published Incoterms was used for almost twenty years until 1953. Total of 8 Incoterms have been published since 1936 with expansions and some modifications.

The latest and most current Incoterms Rules was published on January 1st, 2011, also known as Incoterms 2010.

The seller makes the goods available at his premises. The buyer is responsible for all charges. This trade term places the greatest responsibility on the buyer and minimum obligations on the seller. The Ex Works term is often used when making an initial quotation for the sale of goods without any costs included. EXW means that a seller has the goods ready for collection at his premises (Works, factory, warehouse, plant) on the date agreed upon. The buyer pays all transportation costs and also bears the risks for bringing the goods to their final destination. The seller delivers the good at seller’s premise or named place (works, factory and warehouse,etc), but not loaded on collecting vehicles and not cleared for export. The seller has no obligation to load the goods, even though in practice he may be in a better position to do so. If the seller does load the good, he does so at buyer’s risk and cost. If parties wish seller to be responsible for the loading of the goods on departure and to bear the risk and all costs of such loading, this must be made clear by adding explicit wording to this effect in the Contract of sale.

The containerized transport/multimodal equivalent of CIF. Seller pays for carriage and insurance to the named destination point, but risk passes when the goods are handed over to the first carrier.

Seller pays for carriage to the terminal, except for costs related to import clearance, and assumes all risks up to the point that the goods are unloaded at the terminal.

Seller pays for carriage to the named place, except for costs related to import clearance, and assumes all risks prior to the point that the goods are ready for unloading by the buyer.

Seller is responsible for delivering the goods to the named place in the country of importation, including all costs and risks in bringing the goods to import destination. This includes duties, taxes and customs formalities

Incoterms 2010 has 4 rules for sales where transportation is entirely conducted by water, and these rules are;

The seller must place the goods alongside the ship at the named port. The seller must clear the goods for export. Suitable only for maritime transport but NOT for multimodal sea transport in containers (see Incoterms 2010, ICC publication 715). This term is typically used for heavy-lift or bulk cargo.

The seller must themselves load the goods on board the ship nominated by the buyer, cost and risk being divided at ship’s rail. The seller must clear the goods for export. Maritime transport only but NOT for multimodal sea transport in containers (see Incoterms 2010, ICC publication 715). The buyer must instruct the seller the details of the vessel and port where the goods are to be loaded, and there is no reference to, or provision for, the use of a carrier or forwarder. It does not include Air transport. This term has been greatly misused over the last three decades ever since Incoterms 1980 explained that FCA should be used for container shipments.

Seller must pay the costs and freight to bring the goods to the port of destination. However, risk is transferred to the buyer once the goods are loaded on the ship (this rule is new since 2010!). Maritime transport only and Insurance for the goods is NOT included. Insurance is at the Cost of the Buyer.

Exactly the same as CFR except that the seller must in addition procure and pay for insurance for the buyer. Maritime transport only.

Feray Yuksekbas Kavashttps://www.mts-logistics.com
Feray Yuksekbas Kavas was raised in Turkey. She graduated from Istanbul University Business Administration then she moved to New York .She attended to International Business Certificate Program under Continuing and Professional Studies at Baruch College. As soon as completed this program she started to work with MTS Logistics. Now she is working as Sales Executive at MTS Logistics Inc.
RELATED ARTICLES
Global Trade