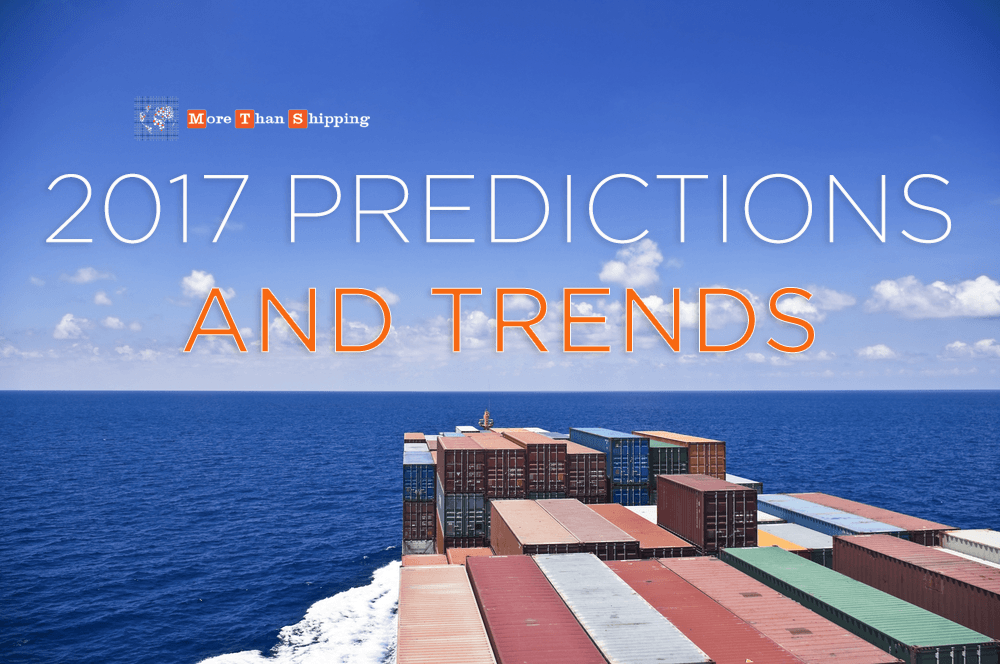 In order to present a clear case for my predictions and trends for 2017, I will be providing you with some U.S. Customs data pulled via Datamyne on NVOCC-controlled inbound shipments for the Gulf and Midwest.

In 2014, Houston experienced a large and clear increase in import shipments that are controlled by NVOCCs. For many NVO, 2014 was the golden year for their growth rate.

For Houston, 2015 and 2016 marked a dramatic decrease in the number of TEUs NVOCCs controlled. According to Forbes, since 2007-2008, net Chinese exports accounted less and less each year as a percentage of China’s GDP growth. So, China ‘s anticipated high GDP growth rate did not reflect on its export numbers, as most of its GDP growth comes from an increasing middle class and consumption-driven domestic industries. Some expect 2017 to be another year for decreased TEU numbers from China and Asia overall, for Houston. NVOs are very careful to interpret these growth numbers for Asian GDP growth rates, as they understand they may not always reflect the net Asian export numbers.

Unlike Houston, Kansas City experienced an increase in import shipments over the years of 2014, 2015, and 2016. As a strategic hub for the Midwest, the Kansas City metro area experienced an increase on the inbound TEU numbers that are controlled by NVOCCs. Business-friendly local governments, along with an increasing investment in rail and other intermodal facilities (Logistics Park KC, etc.), fueled the increase in Kansas City. Commerce Secretary Antonio Soave says, “LPKC has become a haven for excellence in business, and we look forward to continuing this tradition of excellence.” Overall, Kansas City made the area more available and attractive for Kansas-based businesses to handle inbound shipments. If the political economic atmosphere does not hinder any ongoing business relationship, we speculate that 2017 will be a good year for Kansas City.

Looking at St. Louis, the total TEU number controlled by NVOCCs is near the same level as the Kansas City metro area in 2014, yet the increase Saint Louis experienced in 2015 is much greater than its friendly neighbor Kansas City. However, the decrease in the numbers of Chinese origin goods is alarming for NVOCCs in the region. 2017 may be a tough year for Chinese NVOCCs to survive as the decrease of Chinese exports to St. Louis is more than 25%. However, we see that other Asian exports are filling in the gap that China leaves. As a strategic hub for Midwest, Saint Louis TEU numbers will likely decrease in 2017. St. Louis has promising projects to establish itself as a Logistics Hub in the region in upcoming years.

Patterns are changing! How should you interpret this data?

In general, there are a number of reasons as to why Asian imports are changing patterns in these locations. Let’s look at the bigger picture for NVOs. According to the September 2015 research article titled “The Future of Logistics –What Does the Future Hold for Freight Forwarders?” by the UK-based intelligence company Transport Intelligence, the goods flows point to a clear return for manufacturing and retail sectors from legacy globalization to regionalization of supply chains. This means a transformation from traditional East-West and West-East flows to complex networks of developed and emerging markets. Trade is re-balancing with obvious consequences to shipping lines, air cargo carriers and freight forwarders.

Near-sourcing is increasing due to:

We are already noticing the results of this trend in increasing road freight services, and an increase in spot truck rates, at the expense of international air and sea.

China’s abundance of low-cost labor has made it internationally competitive in many low-cost, labor-intensive manufacturing markets. However the ability of China to maintain a rapidly-growing economy in the long run will likely depend largely on the ability of the Chinese government to implement comprehensive economic reforms that more quickly hasten China’s transition to a free-market economy; rebalance the Chinese economy by making consumer demand, rather than exporting and fixed investment, the main engine of economic growth; boost productivity and innovation; address growing income disparities; and enhance environmental protection. This will transform China into the largest consumer hub within a few years. By 2020, it has been estimated that 1.8 billion people (roughly 25% of world population) in emerging markets will enter in the “consuming class”, spending $30 trillion, up from $12 trillion today.

Of course, this is not the end of global trade or the transpacific air/ocean cargo moves. Yet, the emphasis on transpacific inbound cargo to North America will be more balanced. The new Trump administration’s rhetoric to shrink the trade deficit with China through punishing tariffs may certainly contribute to this. “Donald Trump’s campaign proposal to impose hefty tariffs on China has raised the specter of 1930s-style trade wars,” said Priyanka Kishore, lead Asia economist at Oxford Economics in Singapore.

It is projected that U.S. outbound cargo will feed the new consuming giants, and the intra-regional trade between Asia and Europe will increase dramatically as China continues its push for its “Silk Road” initiative.

For the North American consumer market, specs look different for inbound shipments, as large online e-commerce giants like Amazon have extremely big ambitions to dominate the U.S. retail industry. Until recently, these large e-commerce giants outsourced the transportation needs to third parties, but this is changing as Amazon enters the NVO market by acquiring an NVO license and taking control over the transportation end of its global business. The consuming trend is changing in North America, as buying becomes more integrated with mobile platforms. Large retailers such as BestBuy, JC Penney, Kohl’s, Macy’s, Nordstrom, Sears, and Target have collectively lost their market value by 52% (see chart below).

The Evolving NVO market in 2017

As the freight forwarding/NVOCC industry has low barriers to market entry and exit, NVOCCs compete by fragmenting and specializing on various sectors, increasing their global reach, buying power, IT systems, knowledge capital, and value-added service capabilities. The freight forwarding industry is evolving at a relentless pace in this cut-throat environment. Large forwarders are increasing their scale, not only to leverage their buying power with carriers and their geographic scope, but also to develop their range of services, especially those that add value and increase margin.

NVOCCs in this environment put efforts to scale their businesses and invest in technology to provide integrated end-to-end service with visibility to make routing, pricing, and transit time decisions. NVOCCs realized that mobile devices and the Internet will be the primary platform for providing, consuming, and manipulating data across supply chains. NVOCCs who makes the right moves to become “technology firms who transport goods” will continue to thrive in the upcoming years.

At MTS Logistics, have always put the emphasis on being on the cutting edge of our industry.

We provide not only global reach, but also support our clients with our buying power, IT Systems, knowledge capital, and end-to-end personalized service capabilities. MTS Logistics is a “one-stop shop” in containerized imports and exports.

A freight forwarder has the specialist knowledge to prepare the types of documents required for moving goods via sea, road, rail or air. There’s pick, pack, storage, distribution, warehousing and trucking considerations that need to work in sync for harmonious supply chains. When the right technological tools come along, Smart NVOCCs happily embrace it – if it adds value for the customers. MTS Logistics not only embraces the technology it also invests and crafts new technology to uniquely fit today’s needs.

We are pioneers in our industry, providing state of the art technology, great customer experience, the satisfaction of selecting the right service, and the trust built from the promise and delivery. Our technology, coupled with all other tangible aspects of NVO practices, are still crucial for shippers purchasing decisions. People still value people. They appreciate knowledge as value in the supply chain and lean on expertise. This is something that today’s technology still falls short of, and MTS Logistics, takes pride that we are here to fulfill the gap.

With this article, I wanted to provide you some data regarding the NVO business in the Gulf and Midwest regions, areas I am heavily involved with. To interpret this data in a meaningful way, I provided changing trade and shipping patterns, as well as trade and industry analysis to better grasp opportunities in 2017. Even though numbers and data may point to a certain amount of decrease in inbound cargo, one must not underestimate the importance of NVOCC involvement in international shipping.

Our industry evolves at a rapid pace, and with the new Trump administration, the withdrawal of Trans-Pacific Partnership, possible trade war scenarios, and a new steamship line alliance structure that gives strong signals on capacity cuts, there are likely to be various outcomes in the upcoming months and years. As always, we at MTS Logistics, will be the first to inform you and will be the first to adjust our sails to the wind. With our Knowledge capital, Global Reach, Buying Power, and increasing value added end to end services, we will always place ourselves at the top for our clients to take advantage.