MTS Logistics officially celebrated its 20th anniversary and cemented its position as a leading worldwide shipper this past weekend in a dazzling celebration in New York City.

MTS Logistics held its 20th anniversary holiday celebration this past weekend, where the leading global shipper toasted to over two decades of growth and success and honored the company’s employees who made its growth possible.

This year’s celebration was especially memorable and important, as the company’s 20th year in business was technically in 2020, but the Covid-19 pandemic stopped it from celebrating. With the global pandemic fueling consumer demand at home, and the economic recovery following the global shutdowns roaring, MTS Logistics set a new record in 2020, handling over 100,000 TEUs. This figure was the company’s largest since its founding. 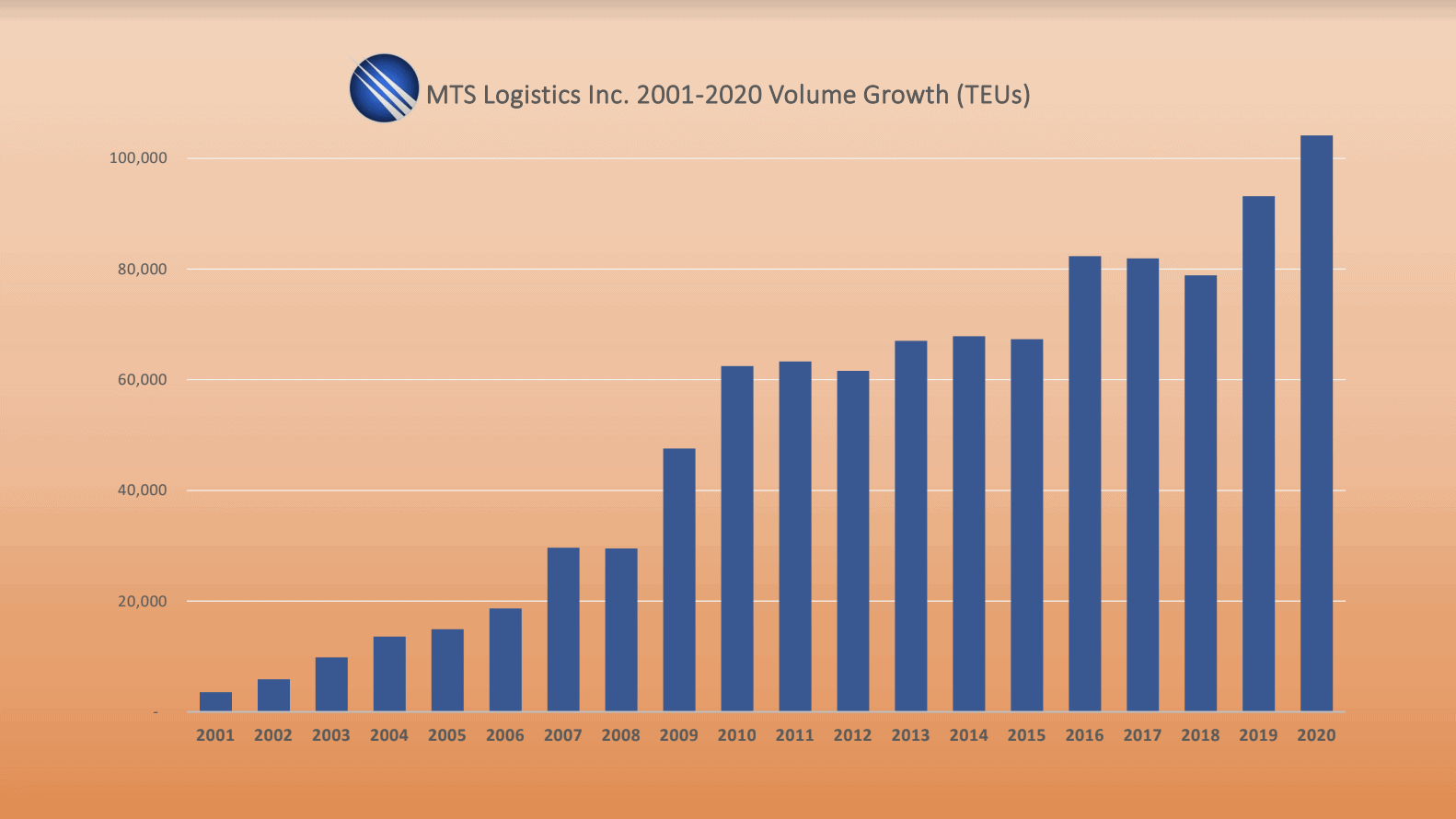 The past year was also a milestone for MTS Logistics’ growth with the company launching two new divisions.

Over the past year, MTS Logistics launched two new divisions as the company sought to capitalize on a growing worldwide shipping market and help companies navigate the complex challenges of the 21st-century logistics world.

First, MTS Logistics launched MTS Trucking, which serves the sprawling Los Angeles metropolitan area on the U.S. West Coast and helps meet the needs of the area’s huge cargo imports. MTS Trucking has been especially helpful this year with an ongoing trucker shortage being just one of many supply chain issues in shipping.

Additionally, MTS Logistics launched MTS Customs Brokerage, which will allow the company to become a licensed customs broker in 2022, facilitating the movements of goods and cargo for the shipper’s vast customer base. MTS Logistics has been preparing for full licensure so that its customers can move their goods through government safeguards faster than ever before.

To meet 21st-century digitized shipping needs, MTS Logistics also launched My MTS, a state-of-the-art app that allows shippers to schedule, book, and track shipments, has now been viewed over 2 million times and downloaded over 21,000 times. In 2022, MTS Logistics will allow shippers to use its digitized Purchase Order Management system, to track purchase orders from start to completion.

At Saturday’s celebration, held at NYC’s trendy Lavo restaurant, MTS Logistics celebrated by honoring all of the company’s employees.

MTS Logistics thanked the entire team, including the first four employees Cigdem, Stephanie, Lora, and Nesim. Although they were not able to join in-person, they joined via video conferencing. All other employees and their spouses were in attendance. All attendees received a commemorative wine gift courtesy of MTS Logistics.

Top-performing employees received awards and several received luxury watches as a token of appreciation for their dedication to MTS Logistics. Even many former employees joined the party to take part in the celebrations. Some original MTS employees sent videos to congratulate the company and staff on its rapid growth. With Covid-related travel restrictions lifted, MTS Logistics employees located in Turkey also joined the party.

To top it all off, MTS Logistics President Sedat Saka had a very special celebratory shipping container cake made – one of a kind.

The very special cake was made into the shape of a 40-foot shipping container, only this one was four feet long. 40-foot containers are the very same kind that are in short supply all over the world right now. In what was almost definitely a world record for the largest shipping cake ever, the cake looked almost too perfect to eat. Guests enjoyed it and marveled at how realistic it looked, with great focus having been made on getting the details just right.

MTS Logisticshttp://morethan.mtstechnyc.com/
MTS Logistics is a Non Vessel Operating Common Carrier (NVOCC) headquartered in New York City. MTS offers a full range of logistical services to an expanding roster of satisfied clients all over the world. More Than Shipping is a NYC supply chain and logistics blog founded by MTS Logistics, with readers from over 140 countries worldwide.
RELATED ARTICLES
21st Century Challenges