Ship Breaking – Is it the Answer to the Shipping Industry’s Overcapacity Problem? 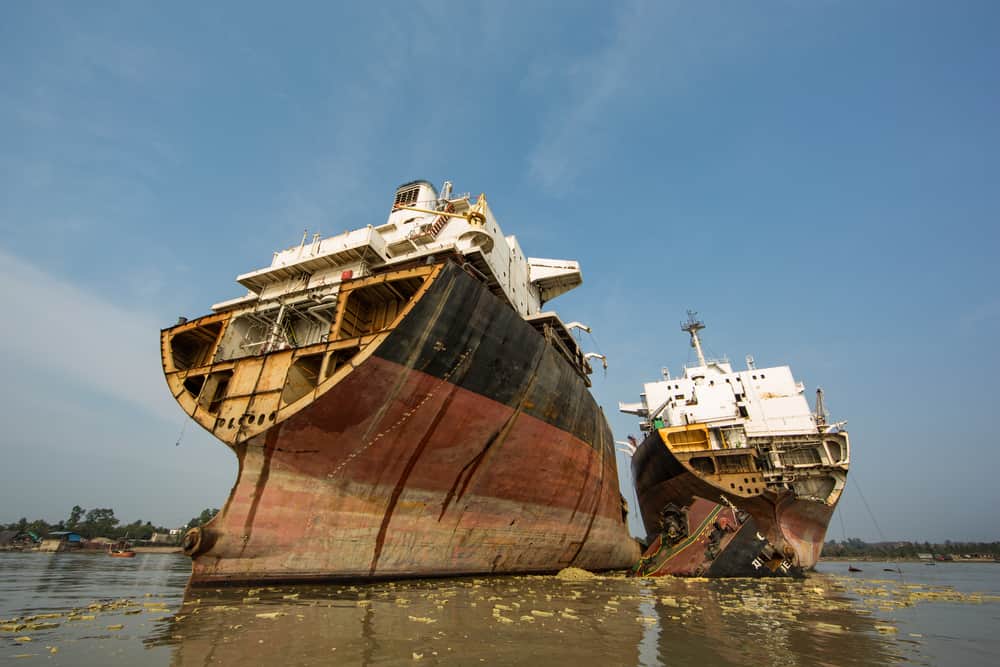 Undoubtedly, 2016 was one of the darkest years in shipping history. Financial distress was unbearable, especially for certain companies. Carriers formed alliances, smaller steamship lines got acquired by larger corporations, and creditors distributed more money to support their borrowers. Long story short, everyone did their best to survive in a collapsing industry.

However, a lesser-known side of the industry had one of its most profitable years in decades – ship breaking.

Ship breaking is a way of disposing unused ships by tearing them up, either for parts or raw material. Modern vessels are built to last for several decades, but after a lifespan of 25 to 30 years, repairing these ships becomes uneconomical. Once cargo ships reach this stage of their life, owners sell them to recycling companies for scrap value. Currently, Bangladesh, India, Pakistan and Indonesia control almost 90% of the ship breaking business, due to cheaper labor costs and fewer health and safety regulations.

Considering the order frequency of new cargo ships and the growth rate of the shipping industry, a life cycle between 25 to 30 years sounds reasonable to maintain a safe supply/demand balance. In fact, until 2006, the average age of vessels sent for scrapping was 32.6 years. Obviously, a longer lifespan indicates that vessel-owners can still benefit from a ship, even when the repair costs keep rising. Because of the exceptionally favorable freight rates during that time, the world’s merchant fleet experienced a substantial growth in numbers, and there was no reason to kill the goose that lays the golden egg.

When the 2008 financial crisis hit the shipping industry, companies started to realize that maintaining older vessels had become less worthy, because of lower freight rates.

In 2009, ship demolition hit a record-breaking level with a more than 300% increase from the previous year. Of course, low levels of freight rates were not the only reason for this increase. In India and Bangladesh, in particular, higher steel prices in local markets drove up the scrap values, too. Consequently, selling ships to recycling companies at earlier stages started to make more sense.

The ship-scrapping market kept fluctuating after this point. Inconsistency of demand for cargo ships and unsteady steel prices changed the trend every year. In 2015, there were only 187,500 TEUs removed from the fleet, which was a sudden decrease from 2014.

With the overcapacity crisis in 2016, we have seen a whole new level of ship breaking.

The average age of the scrapped fleet has fallen to 24, and 201 container ships were sent for scrapping with a combined volume of 699,000 TEUs. This was a 40% increase from the previous record in 2013.

The expansion of the Panama Canal has also created a surplus of old Panamax vessels. Previous generations of these ships, with around 4,500 TEUs, have seen more scrapping than other sizes, as owners and charterers started to replace them with newer and more efficient 8,000-TEU models. Rickmers Maritime Trust actually sold a 7-year-old Panamax for scrap, and it became the youngest vessel ever been demolished.

Even as these numbers look promising for the overcapacity issue, the question still remains: Is it going to be enough to bring the balance needed between supply and demand?

Shipping analyst Alphaliner believes that 100 more Panamax vessels must be pulled out in order to see charter rates return to “break-even” levels. There are approximately 563 Panamax vessels on the water as of 2016, and because of their inefficiency, profit levels continue to decrease.

We will see what 2017 brings for ship breaking, and the shipping industry.