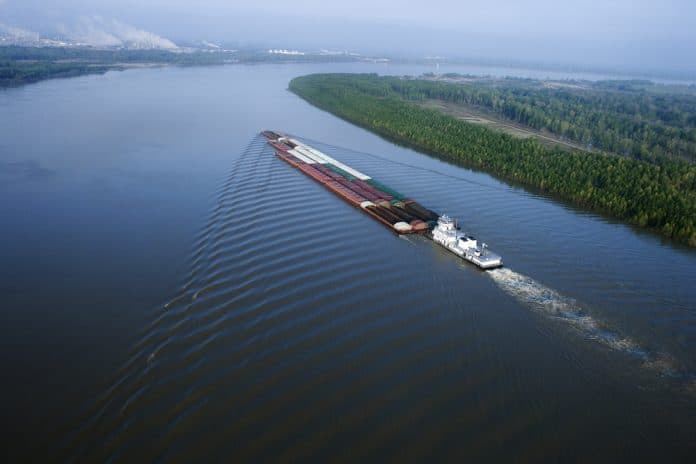 Historically low water levels are slowing barge traffic down the Mississippi River that will impact people and economies worldwide. These barges carry a significant percentage of U.S. wheat, corn and soybean exports from the country’s farms.

The Mississippi River provides a crucial water highway for transporting crops and with water levels so low, barge traffic has been cut by almost half. Drought conditions in the Midwest have lowered water levels on the Mississippi River to their worst depth since the late 1980s. Lower water levels make the movement of barges down the river costlier and slower. This is creating headaches for farmers and other industries that rely on the waterway to move their goods.

The Mississippi River is crucial to the U.S. – and global – supply chain.

The Mississippi River is the main route for America’s breadbasket to the world, responsible for $400 billion in industry and 1.3 million jobs. According to Jonathan Dunn who works for one of the largest barge operators in the nation, they would normally be running about 46 to 50 large-powered boats, but, they are now running about 25 – a drastic reduction. When the price to ship goes up, the value of goods goes down. The price will eventually trickle down to consumers.

America still uses barges to transport commodities such as soybeans, oil, corn, and fertilizer, because it is cheaper. One barge can hold the same amount as 16 train cars and 70 semi-trucks. A barge can move five times farther than a truck on one gallon of gas. Dennis Wilmsmeyer, executive director of America’s Central Port, said there are limitations to the types of materials trucks, freight trains, and other transport methods can move, making barges the most-efficient method of transporting bulk cargo.

The cost to use barge transportation has grown dramatically because the Mississippi River’s low water levels and depth restrictions. Each barge is only loaded at about 75 percent of its total capacity, restricting volume. Barges that typically run 12-14 feet deep are now restricted to 9 feet. This means lots of dead freight that causes the marketplace to be very expensive.

There are currently many barges with soybeans, corn and rice that have been waiting for weeks to get down river. Plastics, fertilizers, oils cannot get upriver. The low water levels have grounded some barges which further delays the barge traffic. To help assist the situation, the U.S. Army Corps of Engineers is dredging some sites of the river to deepen channels and get barge traffic moving. Ultimately, it is up to Mother Nature to help raise water levels along the inland waterways.

In conclusion, the historic low water levels on the Mississippi River are slowing barges and driving up shipping costs that will impact consumers.

Until barge traffic picks up, shippers and farmers will continue to bear the brunt of high rates. At this point, the river needs rain to return to normal levels, which will increase barge traffic, reduce rates and give farmers a way to export their crops. When America cannot move on the Mississippi River, one of our largest water super highways, then prices will go up for farmers and eventually to consumers.