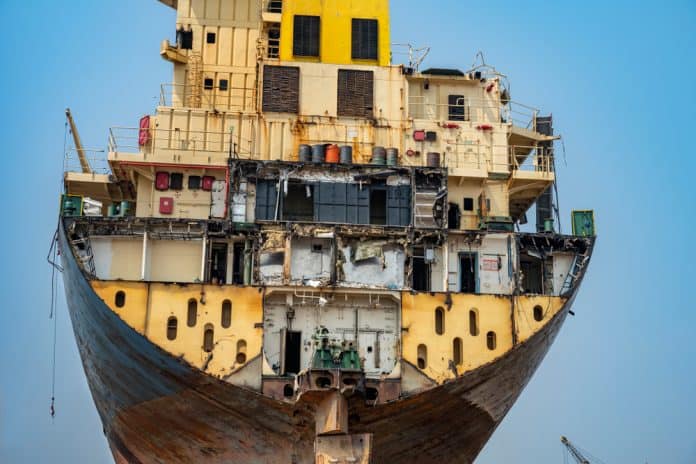 Ship recycling is a technological process that reduces maritime risks, to an extent, by withdrawing ships from a fleet that have completed their economic lifecycle. These ships don’t necessarily need replacing, but new ships with higher tonnage and more advanced technology, that are often more environmentally friendly, have more operational efficiency and value to shippers.

The recycling process is undoubtedly the most environmentally friendly way to dispose of ships that have reached the end of their operational life. Almost every material in a ship can be recycled or reused when overhauling a fleet in this way.

Ship recycling is the reverse of shipbuilding. During the dismantling of the scrapped ship, metal materials are directly evaluated or sent to the rolling mills. Ship Recycling is a process that converts scrap into valuable goods and recycles used natural resources. It is one way the industry tries to protect the environment.

Ship recycling is the withdrawal of ships that have completed their economic life from voyages by taking them into the recycling process to bring them back to the economy. Simply put, it’s the dismantling of old ships on shore, pier, dry dock, or slipway. These operations are the sum of many activities including removing all equipment, cutting, and recycling ship infrastructure systems.

The ship recycling industry is the process of bringing new ships with a higher tonnage that are safer and more environmentally friendly, after the old ships have been scrapped. During the recycling of the scrap ship, metal materials are evaluated or sent to rolling mills and converted into scrap valuable goods.

Ship recycling is one of the industry branches that protects the environment most. Ship recycling, which plays an important role in maintaining the ecological balance, is also referred to as a “green industry” by the International Maritime Organization (IMO). Compared to the extraction, smelting and rolling of iron ore, ship recycling is understood to provide great savings in energy and costs and causes less environmental pollution. 82.6% of the annual average 25 million DWT ships are dismantled in the world and typically recycled after 15 to 35 years of operation.

The ship recycling industry consists of three basic values: create raw materials, add value to shippers, and increase industry employment. It aims to employ personnel and save the foreign exchange paid for iron scrap and to keep the added value within the borders of a country.

Up to 94% of raw materials within a ship are recovered through the process. Steel obtained from it is considered environmentally friendly, as it consumes far less energy and labor when compared to obtaining new iron ore in mines. Despite this, separating the dangerous substances on the ships from the raw materials is a dangerous process. Hazardous materials in the ship can be dangerous for personnel and pose the risk of polluting the environment if they are not removed under appropriate conditions.

Today, graphs illustrating recycling activities are increasing rapidly and recycling facilities are operating at close to maximum capacity. This is beneficial for both the safety of the environment and shipping crew members who benefit from new technological advancements on their shipping routes.